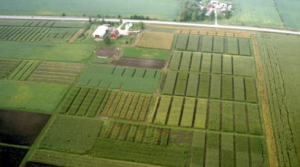 Tests conducted at ACRES may involve planting no-till into previous soybean fields that were first field cultivated and harrowed in the spring just prior to planting.  However, corn ground is typically fall or spring tilled with a tillage tool that will cut up the stalks and chisel the ground.   Often the corn stalks will have been chopped prior to tillage and after tillage a field cultivator and harrow tool is used to prepare a seedbed for soybeans or corn.  Soybeans can actually be planted no-till directly into the standing corn stalks that are usually 6 to 12 inches tall.  In Northern Iowa the corn is typically planted in late April and soybeans early to mid May to avoid the danger of frost.  Nitrogen can be applied in the fall as ammonia or as dry urea.  In the spring nitrogen can be applied as ammonia 82%, dry urea 46%, or liquid urea ammonium nitrate 28%.   We have been conducting a number of fertility studies with nitrification inhibitors to prevent the loss of nitrogen to leaching.   The timing of nitrogen and its management is a large world-wide research emphasis for grass crops.  We have also been doing a large number of studies with foliar nutrient, in-furrow starters, and micronutrient applications.   Comparisons are made with fall versus spring applications as growers need to spread out their spring work load.   There have also been studies on NPK and S as a few of the nutrients tested in higher corn populations of 38,000 plants/A.   We have a small five-foot plot drill which is used for small grains including wheat, but also works well for drilled soybeans.   We have the means to use other planters to look at various row spacings if that is needed.